Oil industry insiders are extremely upbeat about the prospects of finding hydrocarbons in the frontier territory of Namibia as the arc of discovery continues to move steadily from West and East Africa to the Southern African region.

ANE has carried out extensive preliminary exploration on its 22,000 square kilometre on-shore concession in the east of the country – roughly the size of Wales – and with the assistance of the local Herero and San tribesmen, have identified 731 proven instances of hydrocarbons, both oil and gas, seeping out of the ground over the concession area of more than one million acres.

Over 700 documented oil and gas seeps

All four key indicative oil and gas signifiers – methane, ethane, propane and butane – have been scientifically confirmed in the seeps. Where this level of micro seepage has been discovered in other regions around the world, more than 80% have been associated with significant discoveries of hydrocarbons. As a general rule, where you find the one (the four hydrocarbons gases), you generally find the other (oil and gas deposits).

These seeps have been found by the local Herero and San Bushmen, whose knowledge of the region dates back millennia. Chief Hendriks, the paramount chief of the San, told ANE that the one thing they couldn’t fathom about the region’s salt pans – dried-up salt flats – was why there were wet patches dotted over the concession, which never dried up – even in the harshest of droughts. When samples of these wet patches were collected by ANE and sent to Houston for analysis, it was confirmed that they were the result of seeping hydrocarbons.

The late paramount chief of the Herero told ANE that when he was 10 years old in 1945, he and the rest of the villagers who lived near the Omongwa salt pan in the south of the concession, were warned by the South African authorities – which then ruled the South West African region – not to light cigarettes because they could cause fires.

ANE tested samples from the Omongwa salt pan, and found evidence of ethane vastly exceeding the normal background level of 0.2 to 0.6 parts per million. ANE’s data confirmed ethane at hundreds, and in some places, thousands of parts per million. Ethane, unlike methane, which can be caused by decaying organic matter, is a powerful indicator of a hydrocarbon system in the vicinity.

A welter of anecdotal evidence

There is a welter of other anecdotal evidence supporting ANE’s conviction that Namibia may be host to a world class hydrocarbons deposit. During drilling for a water hole on a farm north of the concession in the 1970s, there was a blowout after the drill hit a pocket of gas, which blew the drill rig out of the ground.

During one early ANE visit, a company executive felt faint and nauseous as a result of methane being emitted from the ground. That methane was completely odourless, which suggests that the natural gas did not contain hydrogen sulphide – a noxious pollutant that greatly increases the cost of processing natural gas discoveries.

Having collected this initial evidence, ANE engaged a Peter Huchinson, a renowned oil and gas explorer – who has been responsible for some of the largest hydrocarbons finds over a period of many decades – to apply his propriety satellite remote sensing techniques to the ANE concession. After completed his analysis, Huchinson found 32 potential oil and gas fields covering an area of 3,800 square kilometres. 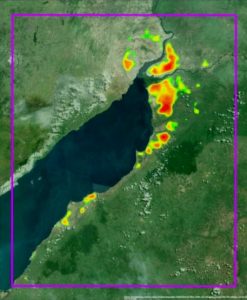 Satellite image of the effect of hydrocarbon seepage

Further confidence was gained in the concession’s prospects when the ANE team applied the pioneering work of the late Donald F. Saunders, who analysed the effects of hydrocarbons on radioactive isotopes. The results suggested overwhelming evidence of hydrocarbons in the areas indicated by the local people, reinforcing the evidence supplied by the geochemical sampling and the satellite remote sensing.

ANE is currently developing its own proprietary multi-spectral satellite remote sensing techniques to detect the extent of vegetation stress, and the bleaching of red clays, which is typically caused by the seepage of hydrocarbons.

The ANE team realised that all this evidence could be collected cheaply, and cross-referenced with known major hydrocarbon deposits around the world, enabling ANE to create a neural network with 17 layers of evidence that will triple the probability of finding oil and gas on frontier acreage such as Namibia at a tenth of the cost of traditional seismic-dominated techniques.

ANE felt that its work was vindicated in January 2017 when the company received an unsolicited bid by valuing it at $500 million. The offer was made by a US-based private equity fund that had used different remote sensing techniques to ANE but had arrived at similar conclusions, and which suggested a total resource base in excess of two billion barrels of oil equivalent in the ANE concession.