Africa New Energies CEO Stephen Larkin declared that the ambition of his company was to light up the ‘dark continent’ during the Blockchain, Internet of Things and Machine Learning In Oil & Gas conference in London’s Canary Wharf financial services district held in May.

Spelling out his goal of bringing light to the more than 630 million people who lack access to electricity across the continent, Larkin said his mission began with a “light bulb moment” on his first day at university in Cape Town when his African roommate, Given, said that the thing he was most looking forward to was being able to study for the first time after the sun goes down.

Years later, after carrying out pioneering work in the South African renewables sector, Larkin was invited by the Namibian government to draft a strategy to provide 2.5 million Namibians with access to the grid. “In 2011, we received a grant from a UN-affiliated non-governmental organisation to carry out a pre-feasibility study into harnessing solar power to do so,” he said. 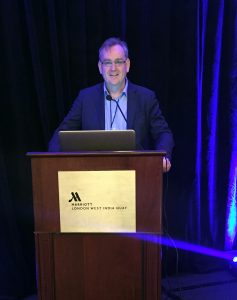 ­­But it turned out that the capital cost of building a solar power plant with the necessary transmission lines needed to put the entire population on the grid would have bankrupted the impoverished southwest African country. “A more financially viable alternative would be to find onshore natural gas, which could do the same job at a fraction of the cost,” he added.

“OK,” the government said: “You go and find it.” It was from these inauspicious beginnings that Larkin co-founded Africa New Energies (ANE), acquired a 22,000 square kilometer concession in the east of the country on the border of Botswana the size of Wales, and launched efforts to raise $60 million to begin a 10-well drilling programme to find hydrocarbons.

“Drilling,” Larkin told the conference, “is expensive, as the failure of Shell to find oil and gas in the Arctic after spending $7 billion on a dry well testifies.” But the ANE team was convinced there must be cheaper ways to find hydrocarbons, and were adamant that it didn’t have to be this way. “We set about developing new techniques for exploring for oil and gas at a fraction of the cost of conventional methods – and with a greater probability of success – he added.

A conventional exploration programme would have cost $150 million, with at best a one-in-four chance of success. Instead of pursuing funding from institutional investors, ANE decided to reduce its costs and looked to crowdfunding to raise money, enable it to maintain controlling stakes in the company and use innovative, non-industry standard exploration techniques.

Drawing on the encyclopaedic knowledge of the local Khoi San, Herero and Nama people of the Kalahari – the late paramount chief of the Herero was a keen backer of ANE’s work in the country, and rallied local communities to come forward with knowledge of oil and gas seeps – “ANE collected documentary evidence of nearly 800 seeps across the concession,” Larkin said.

ANE has created two trusts for the local San and Herero people, to ensure they benefit directly from the development of the concession. While 60% of the taxes earned from the extraction of oil or gas will go to central government, the rest will be retained by the local community where it will be spent on education and job creation. 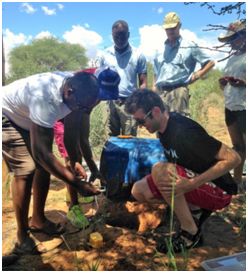 During a ceremony on the concession in May, Larkin handed over share certificates for 15% of ANE to representatives of the San and Herero people. “It was one of the proudest moments of my life,” Larkin said.

ANE has spent the past five years developing an integrated surface exploration algorithm to analyse seventeen layers of data gathered. These include satellite remote sensing of surface anomalies – areas of visual and nonvisual discolouration of ground and foliage caused by the migration of hydrocarbons from underground deposits to the surface – aerial surveys, and geo-chemical analysis of soils.

Many of the individual data gathering techniques have been back-tested on thousands of proven wells around the world. “Integrating these layers of data triples the probability of drilling success at one tenth of the cost of standard methods,” he added.

Using a combination of grants and tax-subsidised crowdfunding, ANE has managed to raise $12 million – thereby becoming Africa’s most successful crowdfunding event – but there is still a long way to go before the $60 million target for a ten-well  drilling programme is reached.

China seeks a piece of the action

Larkin told the conference: “the game-changer for ANE came in 2017 following an unsolicited bid from a Chinese-based investment fund valued ANE at $500 million, and sought a 51% stake in the concession that had yet to be drilled.” He added: “The Chinese had done their own tests, carried out their own remote sensing, and came up with the same conclusions we did.”

But the Chinese bid had to be turned down because of the development techniques the bidders would have used, including: “fracking on the world’s second largest aquifer on which 22,000 people living on the concession depend; importing Chinese slave labour to work the concession rather than providing jobs for the local community, and loading up on project development debt which would greatly reduce the government’s fiscal receipts,” Larkin said.

The rejection of the Chinese bid left ANE facing its original challenge of raising the $60 million. There was no point going to the international development finance institutions such as the World Bank – they would only provide development finance once the resource had been proven.

Loath to raise funding from the City of London – which would demand a disproportionate share of the revenues earned – ANE decided instead to disintermediate the international financial system. The Aziza (precious in Swahili) organisation was created as a vehicle to support start-ups, including ANE, by issuing its own cryptocurrency – the Aziza coin – with the objective of raising $60 million by launching its own initial coin offering or ICO.

ANE transferred 20% of its equity to the newly created Aziza organisation, which has been created to raise, finance, provide support services to high-potential start-ups, and reward investors. In an ICO to the general public being planned for later this year, ANE would receive 75% of the crowd sale proceedings.

“If successful, the ICO should enable ANE to develop the concession, bring power and light to the two-thirds of Namibians who currently have no access to the grid, and demonstrate how the rest of Africa can be provided with the electricity it so desperately lacks,” Larkin said.