Uranium and potassium occur naturally in the Earth’s crust and emit highly energetic gamma rays as they slowly decay. These elements were randomly distributed throughout the Earth as it cooled during formation and contribute to the background radiation that occurs around us. Both elements are relatively immobile while they remain undisturbed in rock, however in contact with hydrocarbons an oxidization process occurs.

Hydrocarbons migrating from a trap that come into contact with these elements make them water soluble, allowing them to migrate towards the surface much more easily. Once at the surface, potassium tends to be carried further afield by wind and rain, while contact with organic material returns the uranium ion to its insoluble, and less mobile state. 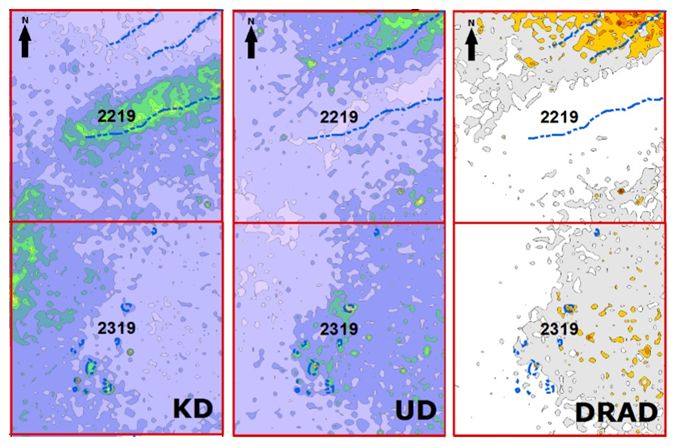 ANE has flown radiometric surveys over the concession in Namibia and created a 2D map of radiation levels from uranium and potassium. A number of locations show potassium levels dropping off where uranium levels increase – characteristic of the effects hydrocarbons have on the presence of these elements.

The above image shows potassium (KD) and Uranium (UD) deviation across the concession. DRAD shows the mean of the two and highlights the anomalies where low potassium and higher uranium levels occur. These anomalies have been found to correlate with those identified by satellite imaging and examination of surface geology.